An artistic command of the Therapeutic day-care centre of Saint-Jacques-de-la-Lande, as part of the New patrons action of the Fondation de France.

Lang/Baumann’s Beautifull Curtain #3 is the result of a commission process carried out as part
of the Fondation de France’s New Patrons action. It was created thanks to the initiative of a
group of users and staff of the therapeutic day-care centre of Saint-Jacques-de-la-Lande, who became the commissioners of the work. In France, psychiatry is organized into sectors that make it possible to map the territory and create a local care system. Thus, a health centre is set up for about 70,000 inhabitants. The therapeutic day-care centre of Saint-Jacques-de-la-Lande is one
of the outpatient care structures of the Guillaume Régnier Hospital Centre, a mental health public establishment based in Rennes, which carries out prevention, diagnosis, care, social reintegration, teaching and research missions. It is a centre for reception, consultations, care, activities and assistance for people suffering from mental illness. It is also a place that makes possible different forms of exchange, conviviality and creation between users, health professionals and artists.

In 2013, this new centre was installed in an urban district with many activities (housing, business, health services, etc.), raising the issue of the relationship between these different activities,
which are integrated into a more active social life than before. During the construction of the new building, it must be noted that no mention of the future activity of the centre appeared on the real estate signs.
The commissioners’ wish was to call on an artist to create a work for patients, staff and also people living in the neighbourhood. Their intention was that the new centre and the work of art that it would house contribute to a destigmatization of psychiatry.

Through the work of an artist, the commissioners wanted to promote the identification of the new building and to change the public’s point of view on the centre’s activities and its users. They also aimed at sharing their positive perception of this place, to highlight its warm, protective and open to the outside world aspects, but also to encourage people to enter these premises and in the same time to increase the desire of the users to leave this refuge to go into the world around. Conveying the ideas of calm, serenity and tranquility, while adding colours, was also a part of the specifications.

40mcube, appointed producer of the New Patrons action in Ille-et-Vilaine and mediator of this commission, accompanied the commissioners in the process. After an analysis of the context, Anne Langlois and Patrice Goasduff propose to the users and staff involved in the project to entrust this commission to the Swiss artists duo Sabina Lang & Daniel Baumann. This choice is motivated by the ability of these artists to create works in both indoor and public spaces, where they regularly work with architecture, and to use colours, which are omnipresent in their work.

In this context, the artists propose to design 30-metre-long curtains for the entire glass façade of the building. On these curtains is printed a composition of brightly coloured rectangular shapes. Beautiful Curtain #3 thus takes the form of coloured curtains that modify the entire architecture. With this proposal, the artists radically change the building both inside and outside. Inside, they provide the spaces with an element that is part of the domestic space, allowing its appropriation by users and staff, bringing bright colours and warm light. Outside, a large and colourful composition visible from afar takes place on the façade. Attractive to people walking on the street, it gives this institution its full place in the city. It is this double aspect that has aroused the interest of the Guillaume Régnier Hospital Centre, the City of Saint-Jacques-de-la-Lande, the Regional Direction of the Cultural Affairs of Brittany and the Health Regional Agency, which have supported the project with the Fondation de France.

Lang/Baumann conceive their works in series that explore different forms and contexts as aesthetic and social experiences. Thus Beautiful Curtain #3 is both responding to a commission and its specifications, and completely integrated into the artists’ practice as a work in its own right and as a step, allowing them to give it multiple uses for different type of audiences. This work thereby follows Beautiful Curtain #1 (2013), created for the contemporary art regional collection Grand Large in Dunkirk, and Beautiful Curtain #2, designed in 2014 for the staff canteen of the Schweizerische Mobiliar company in Bern.

By bringing together functional aspects – allowing confidentiality, giving visibility over the city – and symbolic – formalizing a positive passing between two universes –, Lang/Baumann’s work invites us to enter the therapeutic day-care centre as if in a familiar place, and to leave it to re- appropriate the city around. 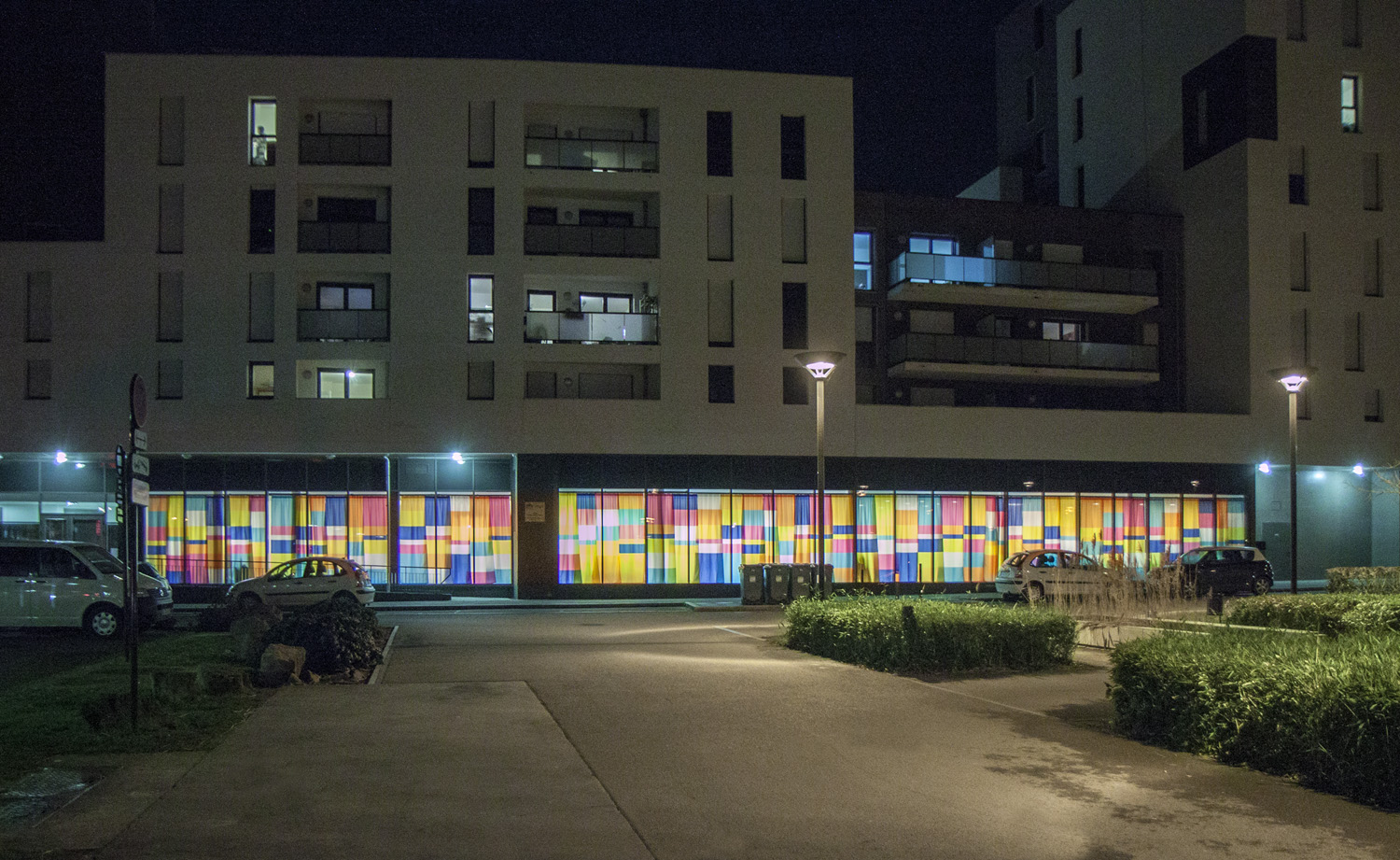