A Hard Edge with a Soft Core

Exhibition presented as part of the Biennale OFF

The collective exhibition A Hard Edge With a Soft Core, which brings together nine artists, including a duo, has been in the making since a residency at the Cité Internationale des Arts in Paris between Pierre Clément, Nicolas Momein and Samir Mougas. Its challenge is to bring together artists working with soft materials that are in the process of solidifying and recording the traces of a gesture.

The works of Pierre Clément and Nicolas Momein mark out the spectrum of the territory explored by this exhibition. At the most arid pole, Pierre Clément presents digital images over-screened with motifs created in series in an impossible projection of the mind as the synthetic cords run their course. At the other pole of this world, Nicolas Momein surfs on the capricious volutes of a moulding material that he constrains with force drippings, contained in shaped-canvases made of Plexyglas. He blurs the lines between sculptural and pictorial with his incredible frozen chaos.

Other encounters have made the realization of this project necessary: Kahina Loumi’s works untangle the Gordian knot of this exhibition. Behind her colours painted in supple monochrome, we find the demand for composition that matches pictorial gestures with elements of fabric prepared, cut and sewn together. His works thus grow at the end of the ramifications where the pictorial and the sculptural are inextricably intertwined.

The clearly visible and highly drawn objects presented by Eva Taulois and Victor Vialles are camped on the floor of the HubHug space. The gesture of inscription in a three-dimensional space is renewed with a nervous grace in Victor Vialles’ works. Impossible not to visualize the material from which a line would be drawn, impossible not to miss the lines of force evoked by the range of objects assembled around his pole-dancing bars. This ani-mistic dimension offered by the convolutions of the material expresses itself even more in the works of Eva Taulois. She invokes in our dimension two singular sculptural entities, veritable golems of expanding materials reinforced by the powers of matte colour. They communicate with us by expressing themselves in a language made of intuitions and emotions rather than words and concepts.

Sticking perfectly to the soft material that hardens little by little, the drawing projected by Sylvain Rousseau on an excessive scale shows that a legible form is a living skin. It is composed of fundamental elements, such as the energy of the extrusion which makes it spread out over a surface and the will to push the experience until the moment when the dressing is complete. Samir Mougas’s drawings are projected into the fusible material, their imprints are revealed like plaster showing the clues of an antediluvian beast passing through petrified mud. His shapes, sketched to the scale of a Post-it note, snake through the polyester resin and radiate black energy that carries the spectrum of all the colours visible to our eyes.

A Hard Edge With a Soft Core wouldn’t be much of a gamble without the carte blanche offered to the artist duo Mobilier Peint, composed of Flora Moscovici and Yoan Sorin. Flora Moscovici skillfully diffuses the paint in the environment that becomes its support. Her works make colour tangible, palpable and as mysterious as an unknown physical phenomenon. Yoan Sorin has several strings to his bow: his works cover several registers of gestures and annex different forms of time. He often works with his own body, vectorizing a projected energy towards the audience. Mobilier Peint approaches the gesture that imprints matter by drawing from a vast typology of materials, surfaces and supports, which speaks for all the artists in A Hard Edge With a Soft Core. 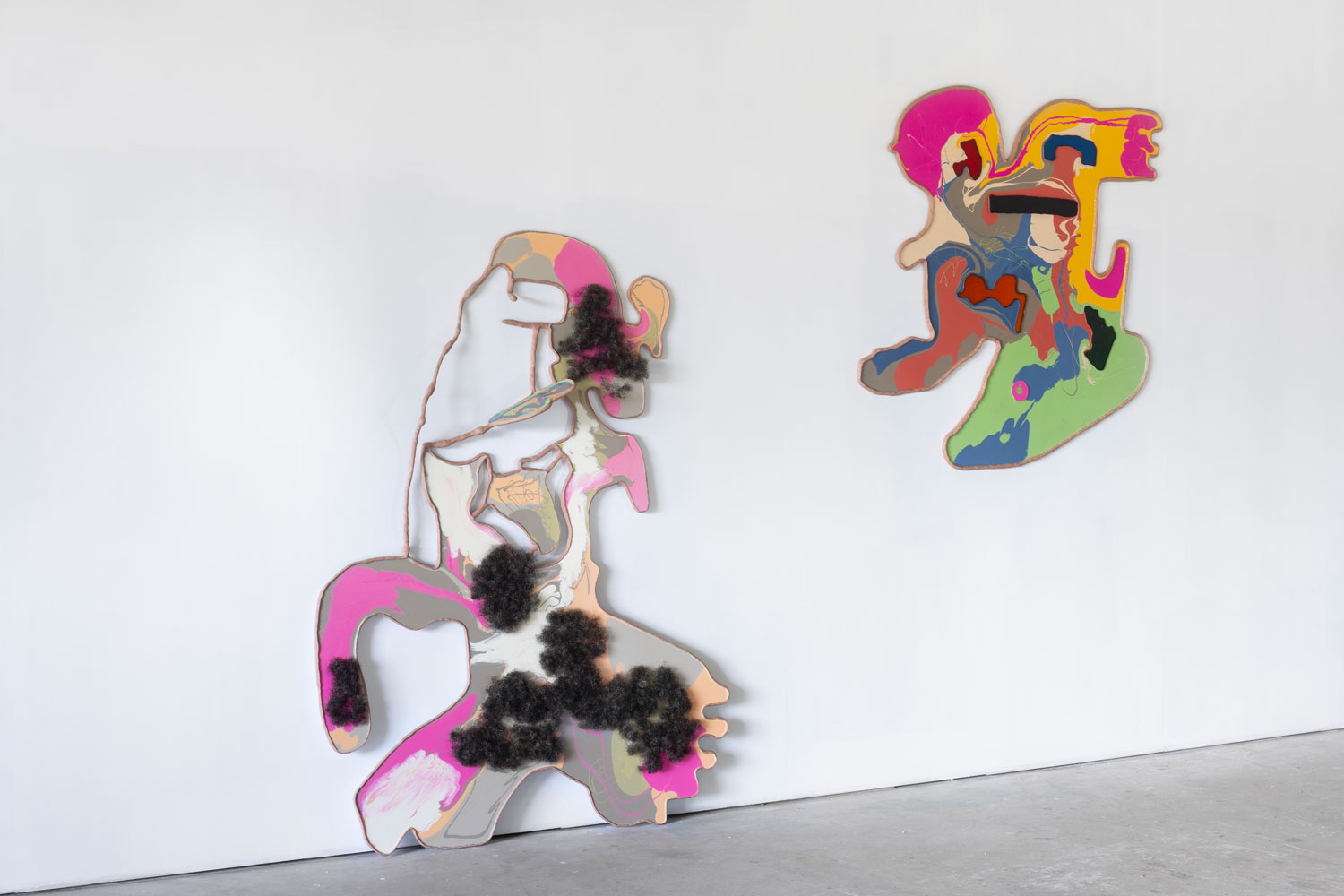 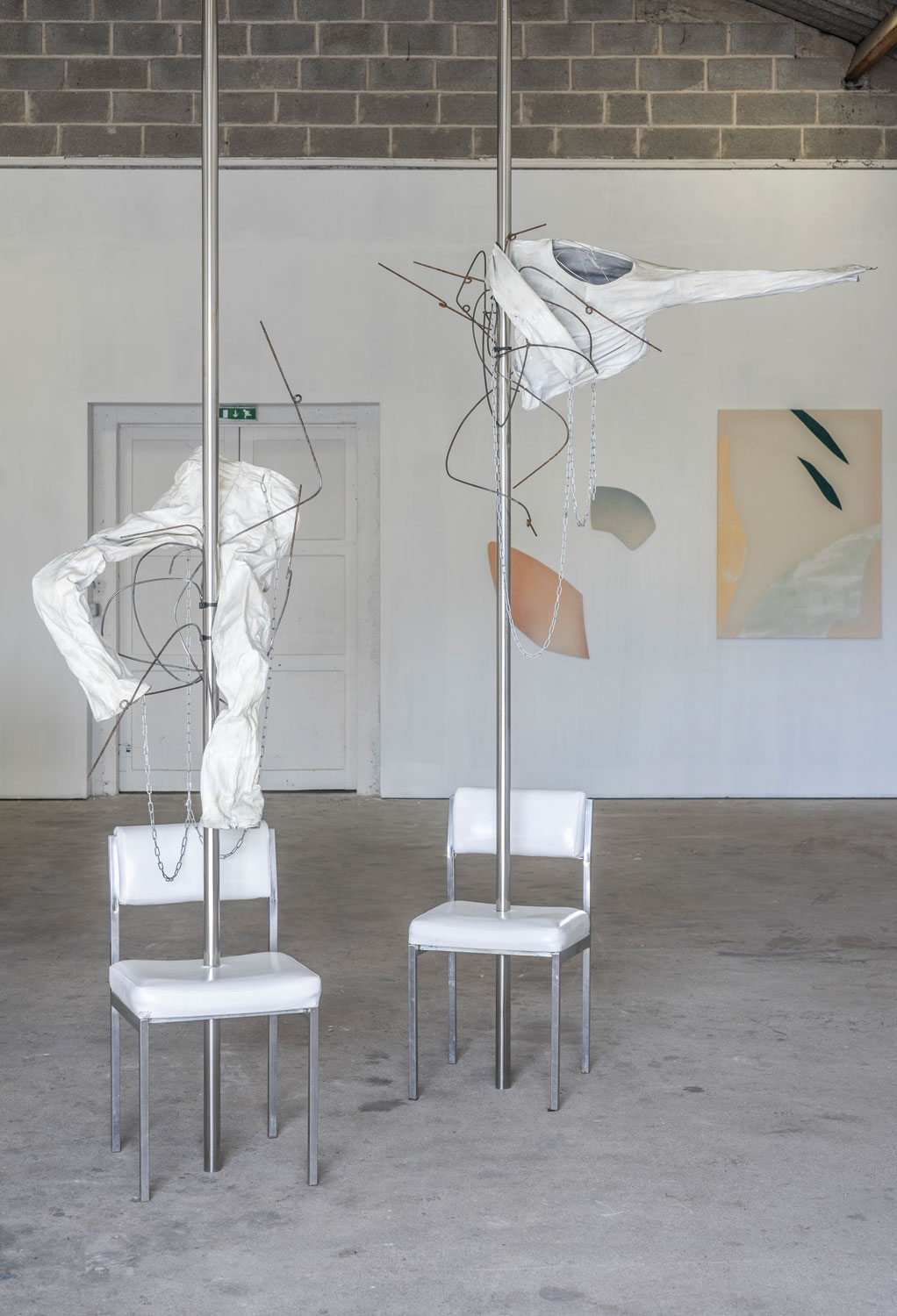 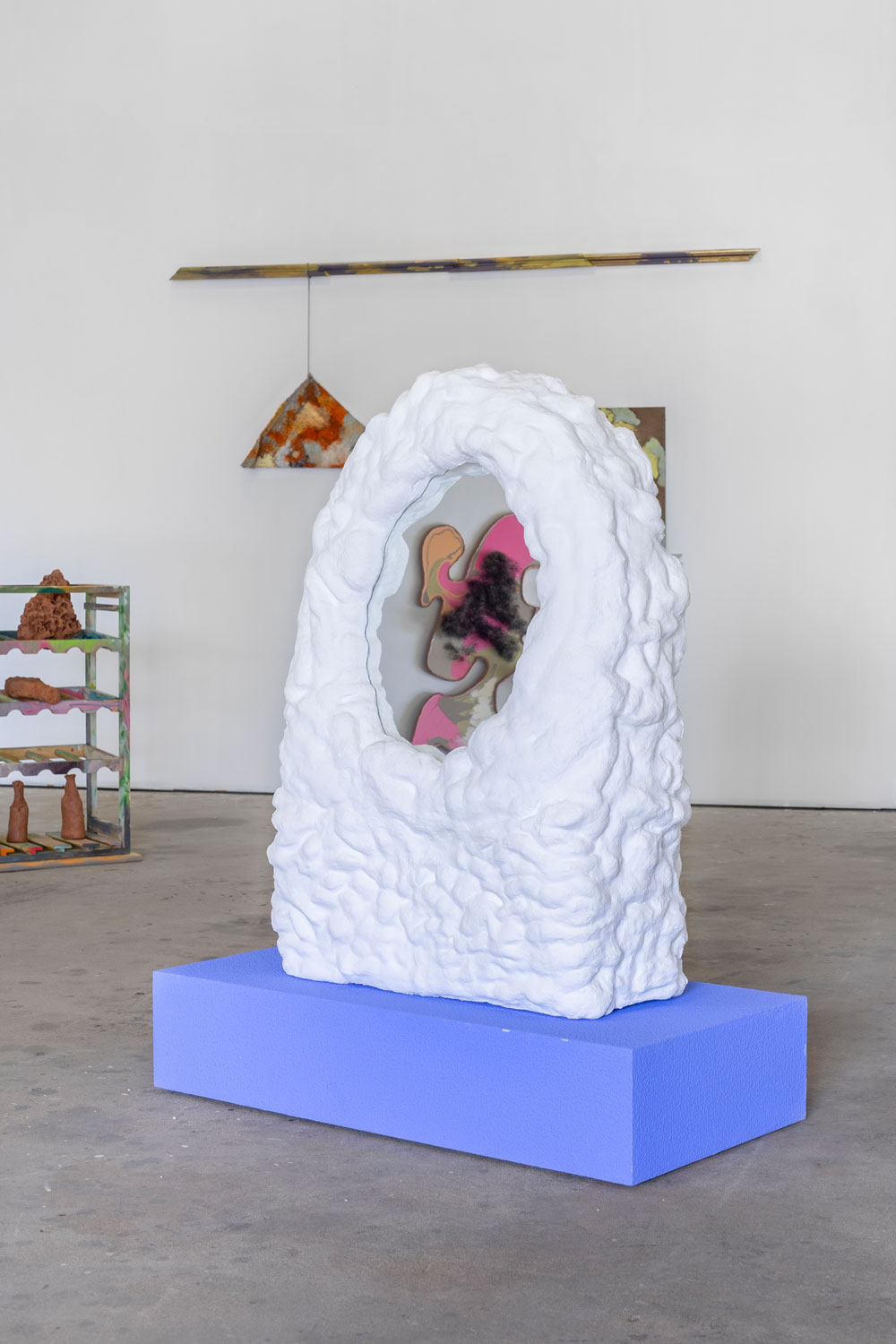 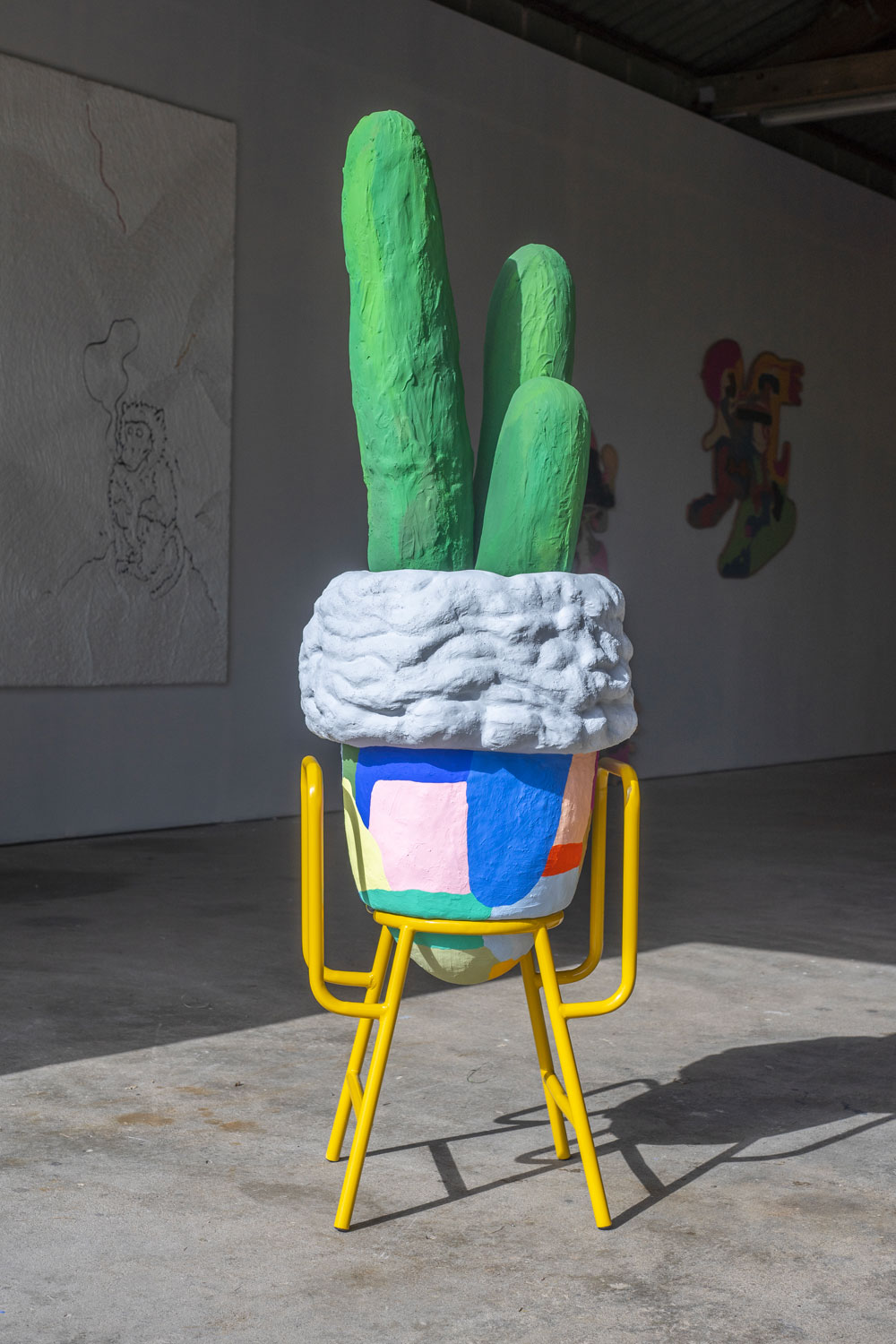 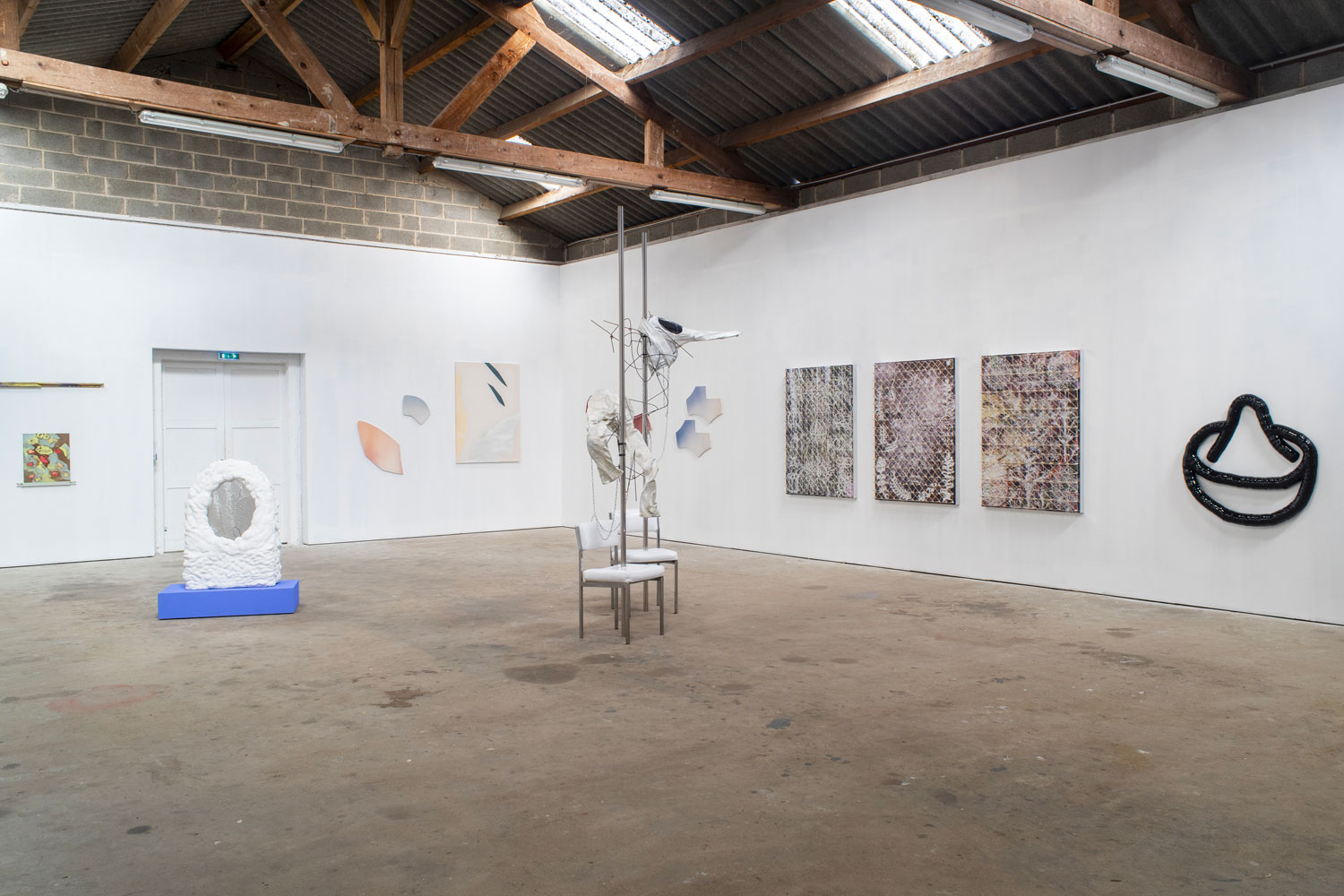 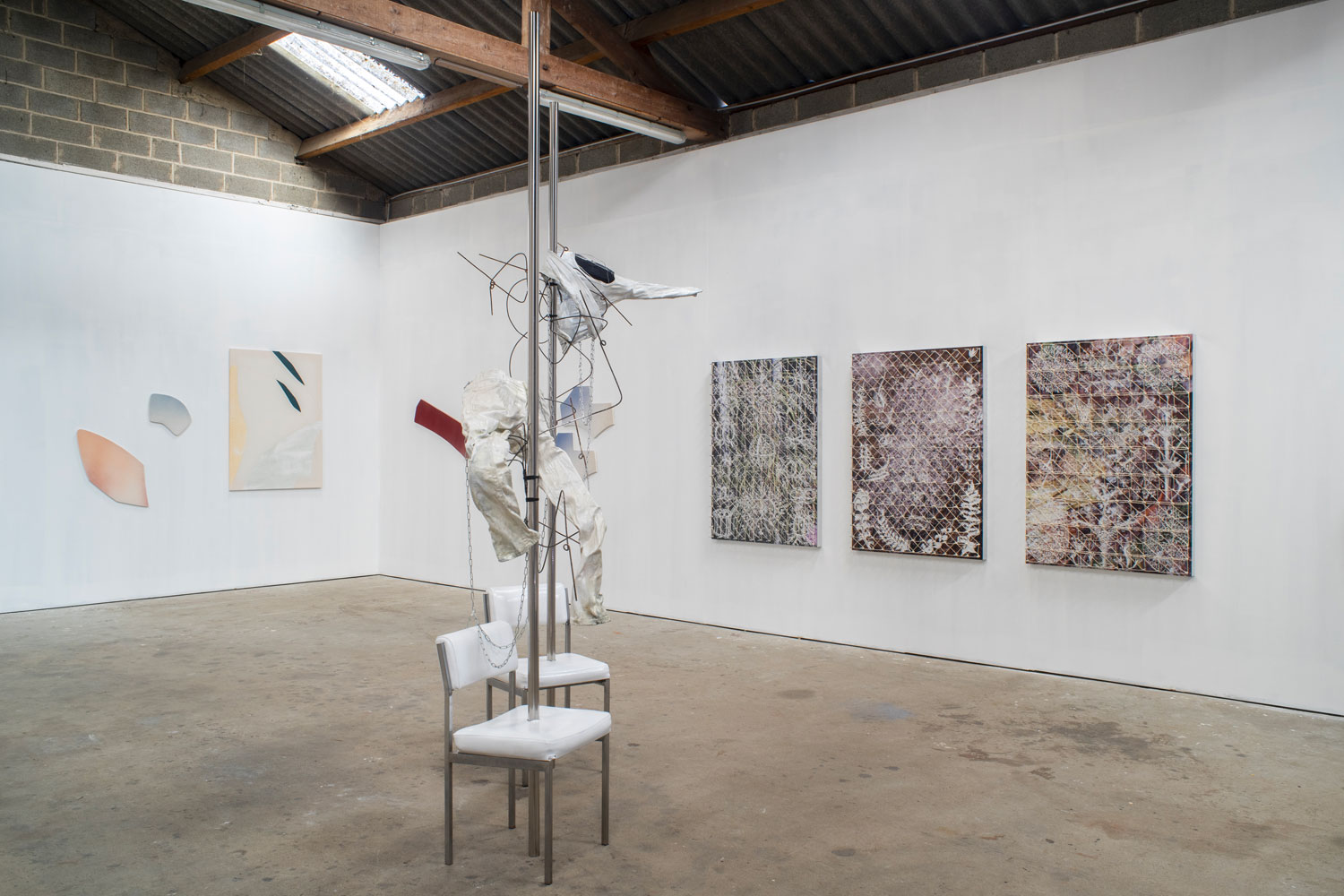 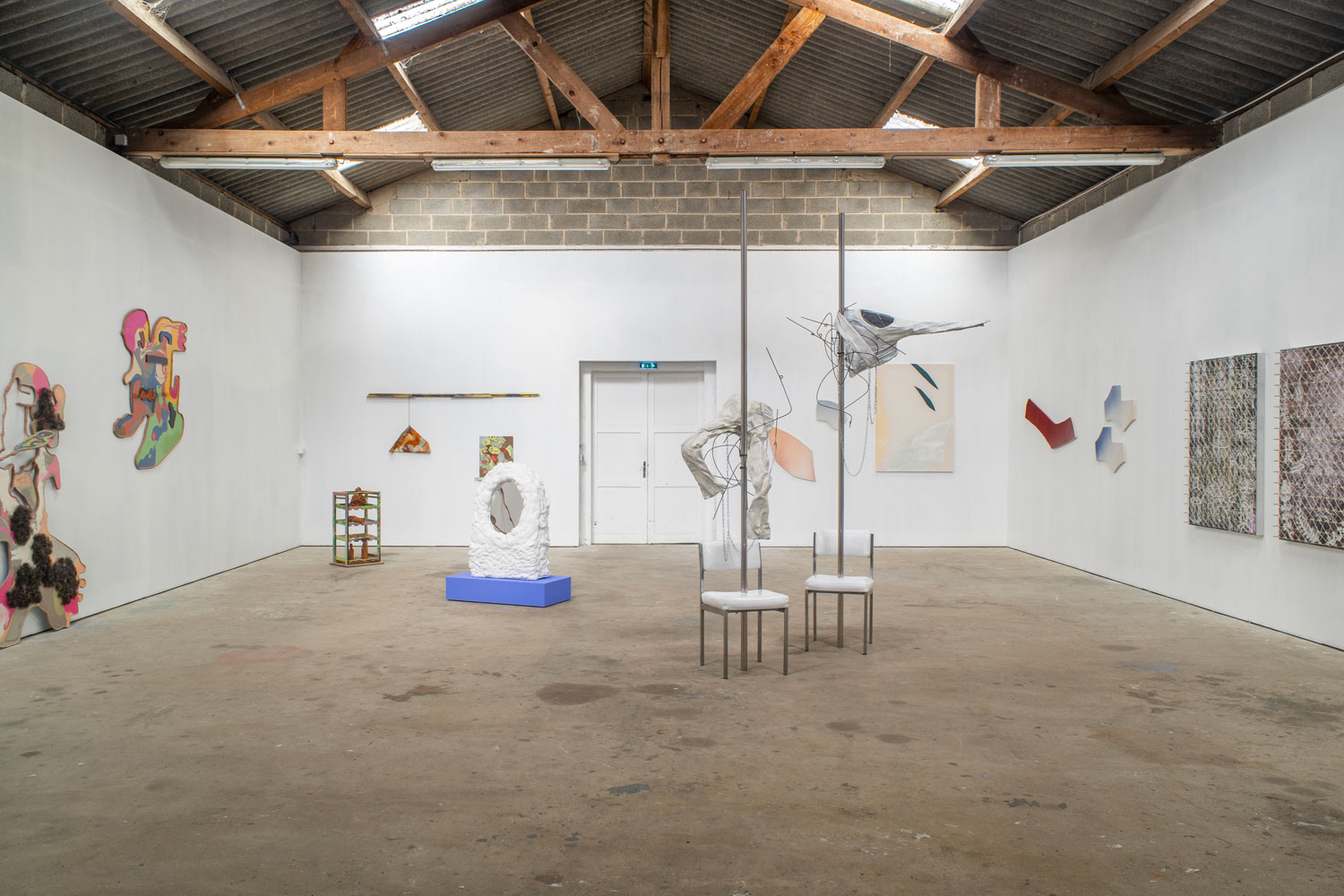 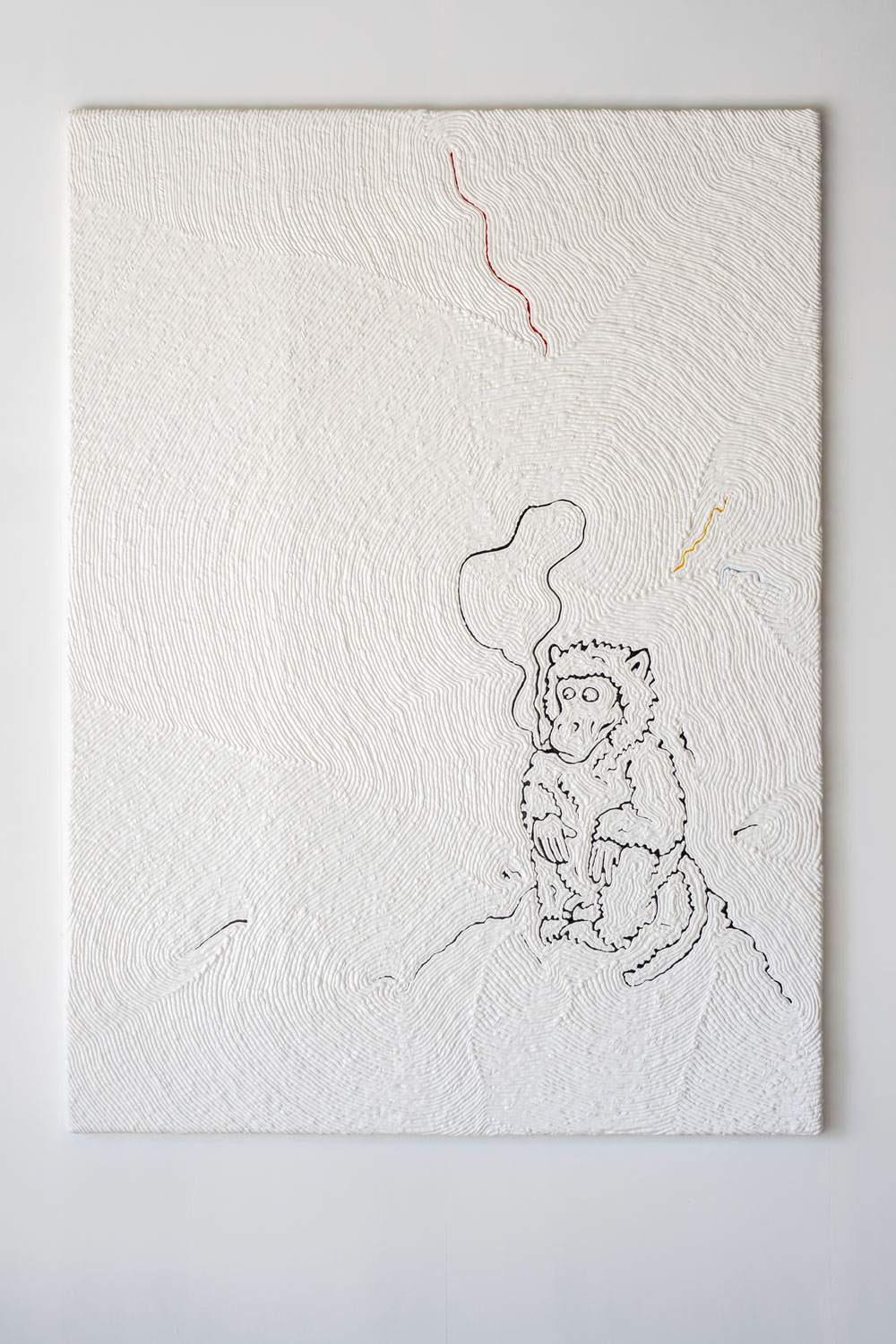 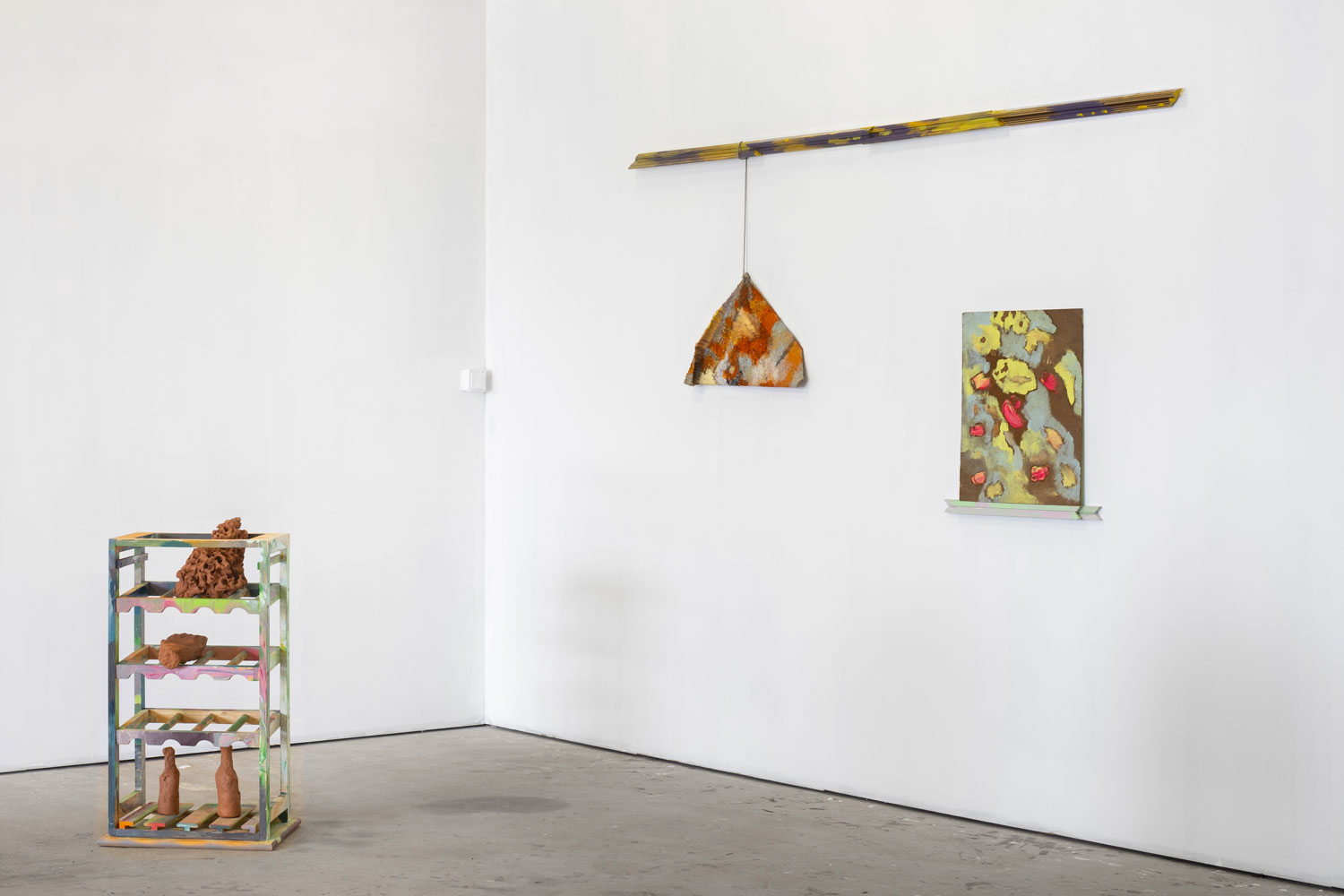 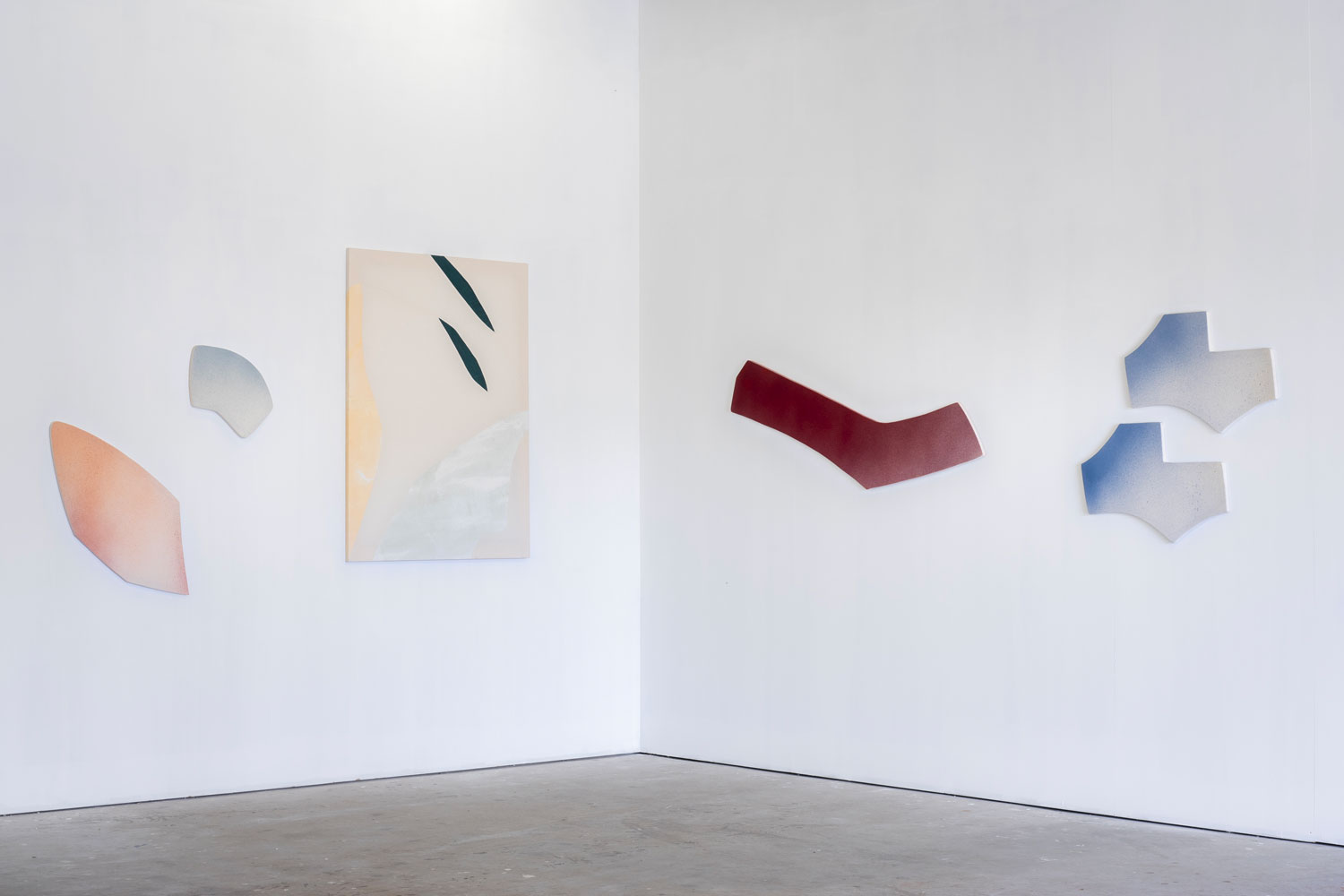 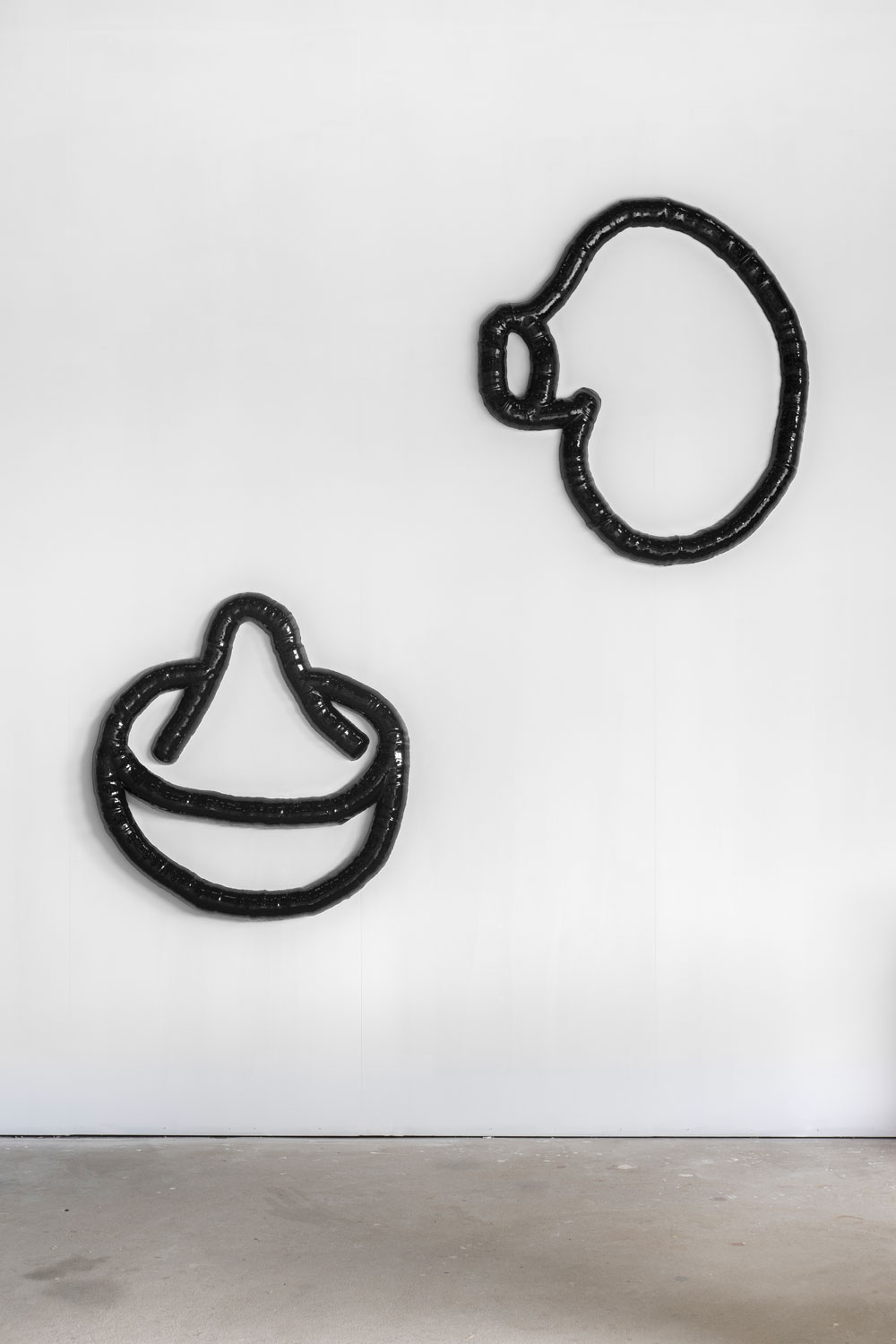 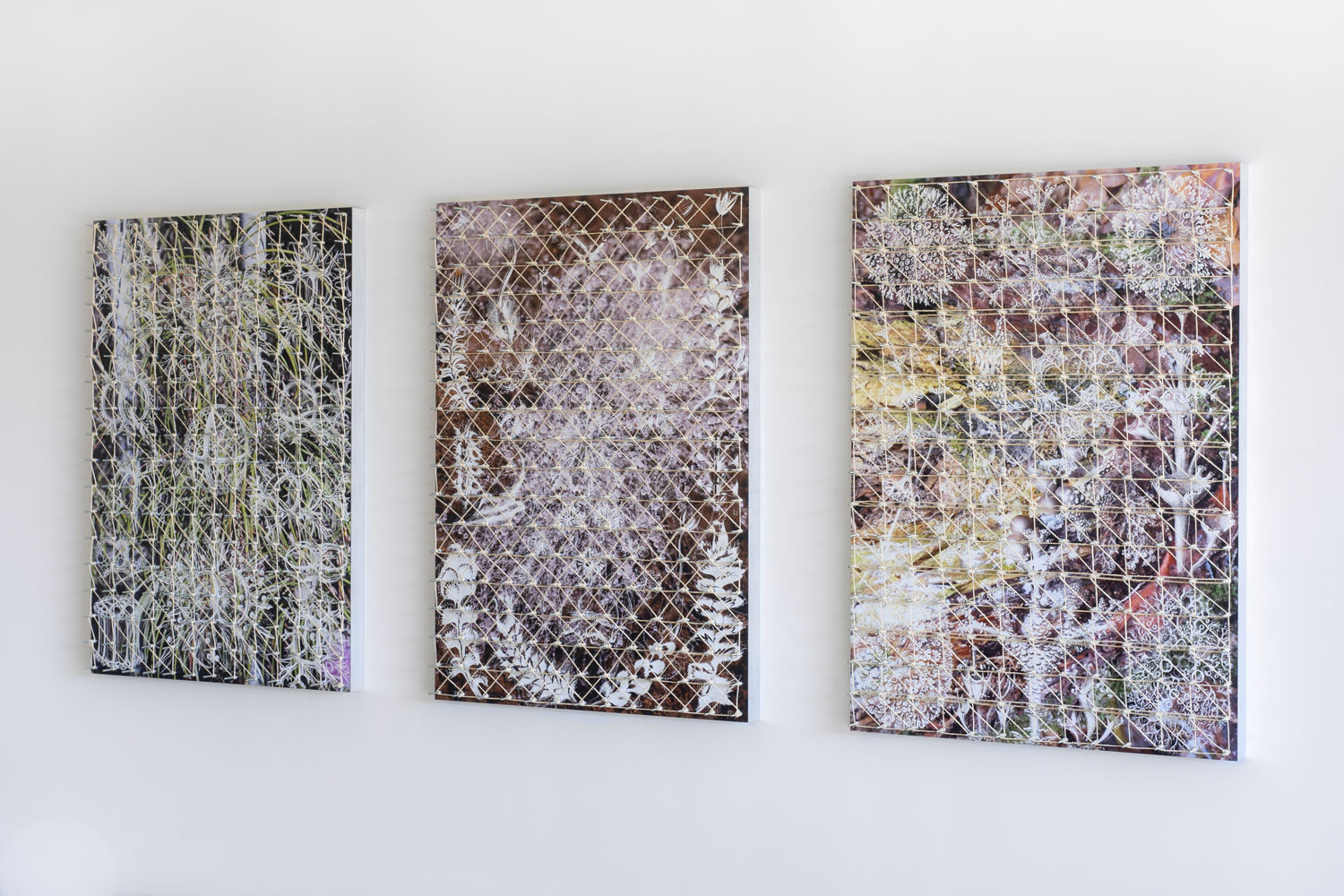